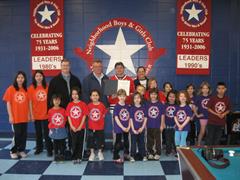 BACKGROUND: The Neighborhood Boys Club (NBC) was founded on October 19, 1931 by Robert Buehler and Richard Valentin, and incorporated as a non-profit organization on April 24, 1935. A pilot Girls Program was launched in 1991 and the organization name was changed to the Neighborhood Boys and Girls Club (NBGC) in 1997. Since its inception, the NBGC has recognized that children are our most valuable resource. Our society places great stress upon them due to the challenges of broken homes, poverty, gangs, drugs, working parents, single parent homes and a lack of positive peer and adult role models. Supporting young people before they fail and helping them grow physically, emotionally, socially, culturally and intellectually is an important role that the NBGC has undertaken through its sports, after school, summer and youth development programs.